Communing with Old Growth Trees as Old as Our Young Country
Joined my husband today on a hike through an Old Growth Forest Stand in nearby Bradford, New Hampshire. The pines are located on five state-owned acres just off Route 103; there's a parking area in a pull-off near the intersection that heads into downtown.

A short trail takes hikers to a grouping of the first few trees where the tallest wears not just one, but two lightning-rod cables. Continuing further along the trail takes nature lovers to the corner of the property where the trail bends to the right and leads to what may be the largest of the trees. The lonely pine, separated as it is from the group, is also adorned with a lightning rod and cable that extends into the dirt at its roots.
It's a beautiful spot along a lazy stream. An easy walk that would make an excellent hike for children and grandparents alike. 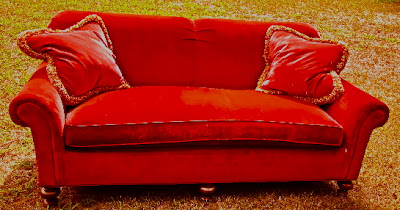 The four of us have a tendency to meet over food. Go figure. :)

And so we are planning the first *official* Granite SoFFA Social - the gathering of New Hampshire (and surrounding areas) Society of Female Film Artists (and of Female Film Lovers...oh, and of people [including males] who support or enjoy hanging out with female film artists!). It will be either Friday or Saturday evening of the NH Film Festival weekend. At Foobar in downtown Portsmouth, which is one of the many venues of the fabulous NH Film Festival. (Exact times and day TBA. Soon.)

The four of us chatted after a Red River Movie event featuring DEAF PERCEPTION (Awesome flick!) and MITO KIDS (Important and GREAT film!). A couple of us had, in the past decade or so, moved to New Hampshire and joined the Women in Film in New England group, but found that most of the events centered around Boston. And while we each of us managed to drive to Boston for a few of the events, we all craved the support of women in film in our own state.

And so was born the idea for Granite SoFFA - the NH Society of Female Film Artists.

We're a group centered around fun. And commiseration. And an understanding of what it takes to pursue this line of "work" (or volunteer gigs) that we love so much. And we hope that others will feel as compelled as we do to hang out together occasionally - to share, to bitch, to boast, to laugh, to drink, to eat, to connect....

And over the next few years, stars willing, maybe we'll all be working together on each other's films. Because that's where we're most at home, isn't it? On set and in the theatre. We can dream, can't we? So why not dream BIG!

Hope you'll join us for a Social gathering of the Granite SoFFA soon. And share your thoughts in the meantime. Be well. And may you enjoy the movies!
Posted by biscotti dana at 11:00 PM No comments: