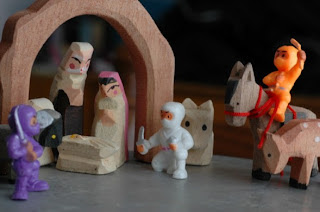 Sometimes you have to wonder: "What would Ninja have brought the baby?"

So I'm back in the world of the daily grind after being away at "Writer's Camp" as I have come to regard Goddard College's on campus residency program. There the routine is anything but ordinary. The people are rich, engaging, and--for the most part--very much like me. It's an invigorating time on campus that helps spark our creative energies and which leaves us sleep deprived, but ready to write (though the nonsense of this blog post may prove otherwise...).

I have decided to take a path less worn as I toss out the ninth draft of my creative thesis and start with an entirely new story. While it is customary to continue working on your thesis project during the G-3 semester since a well-hewn rough draft is due the first packet of the G-4 semester, I decided I just can't proceed any longer with Monica and her journey to find herself and her son.

So I'm working with an all new protagonist, an environmental anthropologist who is concerned about the negative effects of Global Warming on the Inuit people. When she inadvertently stumbles upon a conspiracy that wipes out an entire fishing village and threatens to do the same to people along the East Coast of Canada and of the United States, she must find a way to stop the destruction...or die trying.

Ironically, though it is an all new story I'm penning, I feel much better this time out for having studied and worked with my previous advisor. While I stumbled around in the dark looking for my first story, this time his sage advice has helped me focus so that my outline should be a thousand times better than my latest draft of the previous work. I also have the help of a few good Goddardites and will soon have the assistance of my new faculty advisor when I turn in Packet One, which is due February 12th.

Back to work for me. I'm feeling like I have at least two semesters of work to complete in one. I want to graduate on time. Or at least die trying.

Question of the month: Do you believe in Global Warming? If so, what evidence have you personally experienced to back it up?
Posted by biscotti dana at 2:11 PM 4 comments: