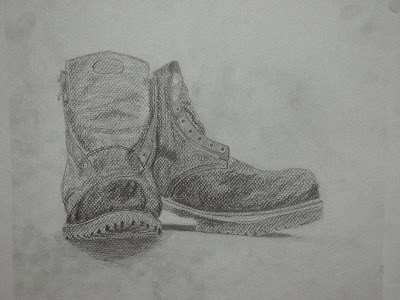 ...in comfortable, familiar boots.  (Drawing by Leo.)
We have it: the confirmed diagnosis.  For our son.  Asperger's Syndrome.  On the Autism continuum.  Somewhere near full-functioning, but not quite. Not yet.  But perhaps one day.
And with it a door has been opened.  And a light switched on.  And every other illuminating, "a-ha" style metaphor you or I can conjure.
So this is what is on my mind these days, and what I will likely most often blog about.
I'll begin with a link to a poem on the Asperger's Association of New England website.  Bet you didn't know there was such an organization, did you?!   Neither did I till an early diagnosis by another doctor sent me searching for answers to my hundreds of questions.  And now I can't live without the comfort and support of the group.
The poem is "Because My Son Thinks Different" by Debi Baron.  It reminds me of the time I went to collect Leo from kindergarten and the teacher met me at the door.  She told me how, in honor of Earth Day I think it was, she handed each child a circle after talking about globes and maps, and asked them to draw Earth.
As she made her way from student to student, admiring their handful of green continents among the blue of water, she arrived at Leo's drawing.  On it was one single land mass, surrounded by water.  She complimented him on it, while trying to gently point out that there are actually several continents.  "Now there are," he confirmed.  "But this is before the continents shifted; it's Pangea."
The teacher was impressed, if not a bit alarmed.  I was proud, and not at all surprised.
And so it was too with his recent diagnosis.  And I'm relieved that it was he who prodded us to bring him to a specialist to help determine why school is so difficult for him--even though at 16 he knocked the GED out of the park and scored high enough on the SATs in seventh grade to never have to take them again.
He will be an adult next week.  And while this new path still has a few potholes to weave in, around, and out of, I am happy to see signs that he is maturing.  A college sophomore on medical leave of absence, he hopes to transfer schools eventually.  First though he wants to take a couple community college courses to regain his self-confidence in his classroom abilities.  And this week he began a job, which he landed through his own connections, so he's feeling a huge sense of accomplishment there.
And while we still have tons of questions, we're learning to take one day at a time as a family.  Thank goodness life is about the journey and not about the destination, since--even wearing our comfortable boots--we'd likely arrive a wee bit late....
Posted by biscotti dana at 10:58 AM 5 comments: