World Cup Workout
Who can run a solid half without even stopping to nurse a bruised ego…uh, I mean shin? I can. Who’s surprised by this? My friends & family, I’m certain. But also me.
I have been addicted to this football not-so-American that has united the rest of the globe (except maybe France & Italy). So today as I prepared to head outside for a jog, trying to convince myself that I could live without seeing the result of the Brazil-Portugal match, I found myself procrastinating inside: one more set of pushups, another set of running on the stairs, a few more stretches. Until finally the second half erupted. And it hit me: there are NO fat footballers (unless you count several of the Football Americans).
As I regarded the inches I can easily pinch in the mirror that is so not my friend, I decided to challenge myself: could I run in place for a solid 45 minutes, plus whatever time the refs added to the clock?
I am happy to report I did it. Fifty minutes. In place. While also yelling at the television (my son will corroborate this), which was muted since I only get the Spanish channel during these games (shame on you, ESPN*, for not gracing the cheapest of us with seeing the games via our cable “providers”). Paul Simon’s Graceland and a little Metallica kept me running the “distance.” And engrossed as I was in the game, I hardly noticed the clock. (Well, that last part might be a wee bit of a lie.)
And so I have my new workout routine. Until July 11. After that I guess I’ll have to return to the trail. Or maybe I’ll give the pitch a go. As long as you promise not to laugh.
* But thank you, ESPN, for making it possible to stream the English version on my Mac.
Posted by biscotti dana at 3:52 PM No comments: 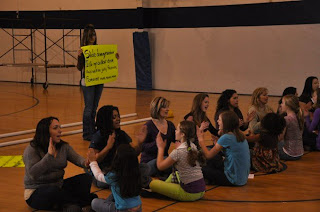 Though summer session has already begun at UNH, I am suddenly in need of a screenwriting intern to help me read & evaluate screenplays for the New Hampshire Film Festival Annual Screenplay Competition. One or two interns needed. All on-line work, no commuting necessary. Three to four credits. Screenwriting experience necessary. You may be able to assist with a two-day youth screenwriting workshop in early July too, if you're interested.
This Fall I am looking for an Assistant to help with numerous events. We can tailor the internship to your needs and interests, ranging from reading and evaluating screenplays to assisting in leading playwriting and directing workshops. I also need someone interested in helping with on-line marketing of the various events. Four credits. Combination of face-to-face meeting time and on-line assignments. Prefer someone who has taken both my Screenwriting and Media Writing courses, but am willing to work with a Media Writing student who has not studied screenwriting.
If you’re interested in applying, contact me at danabiscotti@gmail.com or contact the internship coordinators at UNH-Manchester.

Photo above taken during taping of "To the Power of YOU" this past winter.
Posted by biscotti dana at 2:28 PM No comments: