UPDATE: Our son was accepted to the B.F.A. program at the New Hampshire Institute of Art, where he received a four-year scholarship based on the quality of his artwork in his portfolio!
Posted by biscotti dana at 7:01 AM 1 comment: 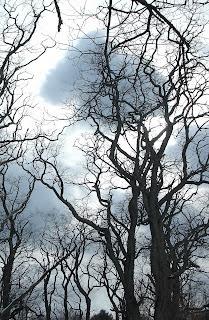 What would these trees say if we were to ask them about global climate change, presidential primaries that last way too long, and sons who graduate high school at the ripe young age of 16?

That’s right: it’s a new chapter. After scoring in the top two percent of current American high school graduates on his GED, we now wait to hear if he will be welcomed as a member of the freshman class at NH Institute of Art this fall.

Meanwhile, my daughter did so well all year long in her advanced math that she doesn’t have to take the final exam. Now that’s sweeeet!

Be well. Be safe. Enjoy nature. And each other.

(Aged Crooked Trees in Henniker photo by me hubby.)
Posted by biscotti dana at 8:12 AM 2 comments: 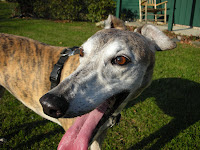 I did it. Just rewrote my screenplay from scratch. Kept my main characters, but cut all the extraneous stuff.

Have decided to retitle this version, too: NIKI SWEET TALK MOVES.

The new title is derived from the phonetic pronunciation of Nikisuittuq, which means never moves, and also stands for the North Star in Inuktitut. So the new title literally means “[she who] never moves, moves.” It’s meant to be a pun that plays on a couple situations that occur in the tale.

My story still tells of an environmental anthropologist, but instead of studying the effects of global warming on the Inuit of Nunavut, Canada as she did in her graduate intern years, she now works for Erdol, the [fictional] oil company in that region. As a public relations spokesperson, Wyn’s been hired to write about and photograph the very natives that Erdol will likely eradicate with unsafe drilling operations. As Wyn grows wise to the greater picture, she focuses on what she can do: and snaps enough pictures to record evidence for her photo essay that will help compensate the native Inuit for their losses.

Writing--and rewriting--a screenplay from start to finish is a great feeling. Thanks for stopping by and sharing this moment with me.

Cheers,
Dana
Posted by biscotti dana at 4:51 PM No comments: 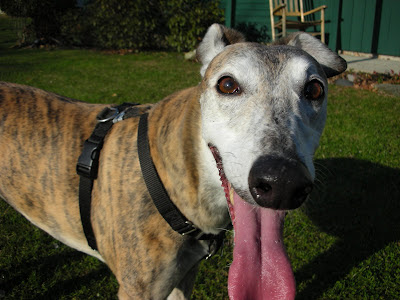 Okay, so you know how most teachers and schools assemble a summer reading list. Well, this is that. Except it’s WAY BETTER homework. So what are you waiting for? Get crackin’!

Yeah, so, I kinda just lied cuz one of the BEST movies of the summer so far is actually a script of an older movie I found in my local used bookstore: LIGHT SLEEPER by Paul Schrader. That’s right: the same guy who wrote TAXI DRIVER, which is another brilliant script, by the way.

But LIGHT SLEEPER wasn’t just brilliant, it was BETTER than brilliant. It was the perfect pat of butter that dribbles off your summer corn on the cob.

Too bad he didn’t tap Scorsese to direct, though. But the film fiasco is another story. Read the script if you can get your hands on it. Schrader now makes my favorite screenwriter list: right up there with Frank Darabont and Andrew Niccol.

Last night my kids and I saw DISTURBIA. Yeah, I’m a little disturbed I saw this. But as I teach: you can learn a lot from a BAD movie. Often MORE than you can from a good movie.

It did have one of the best car crash scenes I’ve ever witnessed on screen, though. And contrary to my bubbly neighbor’s perspective: yes, I think he COULD have walked away from that crash. I did once upon a time. It’s the first movie that’s ever taken me so vividly back to my roll over accident that prompted the Statie on the scene to ask a driver who stopped, “have you located the body?”

“I’m the body!” I screamed as I ran right into him.

Anyway, another day. Another dementia.

I highly recommend the SCIENCE OF SLEEP and another with actor Gael Garcia Bernal (who is rapidly becoming one of my all time fave actors—he dissolves into his roles flawlessly)—MOTORCYCLE DIARIES.

So, any of the THREES make a recommended viewing list yet? We’ve attempted to see Spidey Man III three times, without success. First time we had to leave waaayyy to early to pick up kids from a junior high dance so I saw nothing and my son and his girlfriend saw one of the worst movies ever made (title forthcoming when he awakens); second time it was SOLD OUT at the tiny (but very cool) Peterborough theatre; and third time—last night—we just couldn’t get out the door in time to see it. I think the movie goddess is trying to tell me something.

PANS LABYRINTH is on my must see list after being highly recommended by two friends. And I can’t wait to see HOT FUZZ (as I look at the SHAUN OF THE DEAD movie poster hanging in my office) and SUPERBAD, which comes out really disappointingly late in the summer line-up.

I also just bought the SUNDANCE FILM FESTIVAL collection celebrating 25 years with a bunch of movies and screenplays I already own, like SIDEWAYS—awesome both on the page and on the screen. But I like that it has a few that haven’t made it to my collection yet: like AMERICAN SPLENDOR, THE USUAL SUSPECTS, and SEX, LIES AND VIDEOTAPE.

Okay. So that pretty much does it for my “new” movie summer viewing list. Now I NEED, indeed I BEG your help: what ELSE should I be viewing and/or reading?

Oh, that reminds me. I know this isn’t supposed to be a summer reading list: but I just read Peter Hedges’ awesome novel WHAT’S EATING GILBERT GRAPE, which inspired, yes, his well-adapted flick. The novel is delightful. I had trouble putting it down. One night I even read till midnight. Those who know me and my 9 PM bedtime (so I can rise and write at 4 AM) know what HIGH PRAISE it must be to say a novel was worth staying up till midnight to read. OH: I just realized he wrote the script ABOUT A BOY, too. I’m gonna have to add that to my list of must haves.

Now send me your list. Please. I’m dying here in my own revisionists hell…as I rewrite from scratch (once again) my latest screenplay…that hopefully will lead me to my graduation after only ONE LAST semester to go!

Thanks for stopping by. --Dana

PS This June’s READER’S DIGEST: next to last page, LIFE IN THESE UNITED STATES, read all about lobsters and 15-year-old nightmares while vacationing with family. Yep. That’s right: OUR family. ‘Nough said, huh?

(Photo above of Ellory, our recued Greyhound, taken by me hubby. I think she's saying, "Now what?")
Posted by biscotti dana at 9:47 AM 2 comments: