In sharing my experience for the February article, What Causes Interstitial Cystitis? How 10 Women Got to the Root of Their Bladder Pain, by Suzannah Weiss for Bustle, I was asked, "How did you find out your IC was due to Lyme?"

I thought I'd share my answer here, in case it can help someone. In the article, which deftly weaves together the stories of all 10 patients, I am the Dana that is mentioned somewhere in the middle.

The short answer is that my LLMD told me so—based on his years of experience with patients.

The medium answer is that I saw evidence of it as the antibiotics that helped me heal from my Lyme ALSO eventually eliminated my IC symptoms.

The long answer includes dates/timeline:
Thanks for asking! Good luck with the article. And feel free to ask additional questions. I’ll try not to be so verbose.

Posted by biscotti dana at 1:12 PM No comments:

Today it was only a glimmer of a chapter, but it happened. Rewriting, actually. Chapter Six. Dinosaur that I am, I tend to write in a notebook first. Yes, longhand. Cursive even. That none but I can read (just ask my former students or clients).

So today I grabbed one of three notebooks filled to the brim with the sketchings of my first-draft, second-in-the-series novel, and picked up where I'd left off: at the beginning of the next chapter. I didn't get far. But I'm not bothered by that, because I'm writing again.

Also editing. I finally found a couple hours to sit with a client's final chapter of her novel (yay, her!!!) to edit and pen my notes. And before that, I reconciled four months of our household bills, and prepped for the next onslaught. Including that big ticket item: the IRS. Oy! They do come calling for those of us who happen to be self-employed. That's both my husband and me. Therefore, April 15th is always the most painful day of the year: The day we pay up on the former year's taxes AND pay the first installment of the current year's taxes.

If lawmakers want my vote, they would do well to break up those two painful self-employed payments. And do something about making healthcare affordable. Before you scoff--do you pay over $16,000 a year for two people, which doesn't amount to much of anything covered until we fork out another $13,000??? Glass houses, people!

Of course they should also bloody well follow New Zealand's lead and get the high caliber rifles outta the hands of everyone in this country (NRA, I'm looking at you, you nasty buggers!). And don't even get me started on climate change (have you seen my film at the McAuliffe-Shepard Discovery Center? If not, why not?).

But I digress. Since I do, reminder to self: I need tissues next time I'm at the grocers. And bananas. 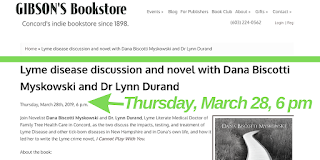 So tomorrow's looking up: I think I'll jump right back into rewriting and typing chapter six into my computer. I'll also be picking up my already published novel, as I reread and review before my Lyme disease discussion with Dr. Lynn Durand, LLMD, at Gibson's Bookstore next Thursday evening at six o'clock. It's free, if you want to join us. You can buy my book too while you're there. That won't be free, but what in life actually is?

I'm exhausted, and unnaturally nocturnal these past few days, which some are telling me is on account of the super huge moon lighting up the night, and some other hocus-pocus planetary stuff, which I'm still not sure I absolutely believe...though I do believe I'm haunted by...uh, visited by...my spirit guides, dead relatives, and guardian angel.

But once again, I digress. The point of this blog? That I'm writing again. And whether or not you're happy about that, I can honestly report that my protagonist Anna McGrory is tickled to bits that it is so. She wants to get on with this body identification process, after all.

Ohh...who will she see in that drawer in the morgue? Only my spirit guides know. I hope.

Posted by biscotti dana at 11:55 PM No comments:

Wow. Have I been lazy or what?

Just noticed my last post was in December. While Novel Launch Day was pretty spectacular--thanks to all my friends and the two sites that hosted me and my NEWLY PUBLISHED novel (Gibson's Bookstore in Concord, NH, and MainStreet BookEnds in Warner, NH)--a few things have happened since.

Mainly, my step father-in-law has transitioned from our home to an independent living facility across the street from the hospital, which is handy when it is necessary (like all day yesterday when I went with him to a last-second doctor visit to help solve a suddenly painful issue). It is supposed to be a win-win situation: a win for him since he is so social and now has tons of friends to hang out with.

It's a win for me since I can again--in theory--return to my writing since--again, in theory--I will be less exhausted taking daily care of his needs. That hasn't quite happened yet, but it's only been two weeks, so my frequent trips in to see him are only because we have been setting up cable, nursing visits, dropping off medicines and medical necessities that are still shipped to our home, and accompanying him on his myriad of physician visits.

I'm not complaining. Just recording daily life as a Lyme warrior who has a few other co-infections off and on, and a plethora of autoimmune disorders. To make matters worse for myself, when January and February became especially stressful (did I mention my mother has moved in with us too--meaning I am also driving her and her little dog to the dentist, doctors, and vet), I stress ate. Don't judge me. When I'm harried and exhausted, white carbs appeal to me: especially popcorn and butter toast.

I'm still making plans and canceling them. I have only a couple friends left who seem to understand this bizarre condition of mine. But at least my husband completely gets me, or at least supports me and loves me despite my being prone to needing about 48 hours of rest for every handful of hours of activity.

And I plan to return to Anna McGrory's exciting life as a Lyme warrior and amateur sleuth. When I last joined her in unlocking her journey into Book Two of my Lyme Murder Mystery Trilogy, she was about to identify a body. She's afraid it's Frank, which should be just bones by now since it's been over a year since he was murdered. She wonders if there's a real-life Dr. Brennan (on the TV show Bones) who could be called in to make a more accurate I.D. But maybe it's not Frank's remains, after all. I left off just as she and her nephew were approaching the morgue, so I don't know who's in the drawer either. I can't wait to find out!

This rambling post is to say that I'm back. The writer me, that is. I've actually never gone anywhere. I simply got distracted by real life duties that have landed me on the sofa for far too much recovery time. But look at me now: a new post. Maybe the next will be to update my progress on the next novel. I can only hope so.
Posted by biscotti dana at 12:34 PM No comments: