“To the Power of YOU!” wins its category at New Media Film Festival in San Francisco

“To the Power of YOU!” – the public service announcement (PSA) created for Big Sisters of Rhode Island in the inaugural 7DayPSA Competition hosted by FLICKERS – took top honors in the category Trailers (which also included other shorts) at the New Media Film Festival’s San Francisco screening on November 5, 2011.

The PSA, which has aired in the Rhode Island market since winning first place in last year’s inaugural 7DayPSA Competition and which was Emmy-nominated earlier this year, screened before a receptive crowd at the city’s historic Landmark Lumiere Theatre.

“It’s been the ‘little engine that could’ for us,” said Dana Biscotti Myskowski, producer and creative director of Green Chair Pictures, who entered the New Hampshire-based team Smoky Quartz Productions in the inaugural competition in January 2010. 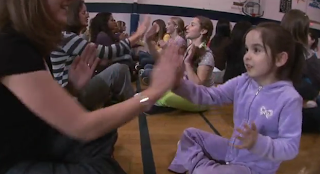 “It was fun to hear the audience ohh and ahh when ‘Purple Girl’ appeared on the screen,” Biscotti Myskowski said, describing the moment when one of the youngest of the 40 actors dressed in a plush purple warm-up suit appears in a close-up shot about half way through the minute-long piece.

It took Biscotti Myskowski several seconds to process that her team’s PSA had been announced during the awards ceremony presided over by New Media Film Festival Founder and Director Susan Johnston. “I wasn’t surprised that our piece resonated with the judges, but I didn’t realize it was in juried competition,” Biscotti Myskowski said.

The PSA was conceptualized, written, produced, and edited in seven days, in the competition that pairs filmmakers with charitable organizations in regional and state contests. The National 7DayPSA Competition, conceived of by Rhode Island actor and Emmy-winning writer Duncan Putney, has been expanding each year to include more areas of the country.

In addition to its overall awards for best piece, the PSA has also been awarded three individual prizes, presented to some of the creative minds behind the short: Adam Jones was recognized as Best Director at the inaugural competition; Gary Anderson received the Best Cinematographer award; and Best Editor went to Marc Dole.

To find more information on this and additional projects, please visit the Green Chair Pictures website.
Posted by biscotti dana at 4:11 PM No comments: