This just in from the Nunavut and Circumpolar Regions Yahoo Group Digest (number 861) posted by moderator George Lessard (as published by the Associated Press):

AP: Polar bear to be a protected species

Polar bear to be a protected species
Associated Press
May 14, 2008

(AP) -- The Interior Department declared the polar bear a threatened species Wednesday, saying it must be protected because of the decline in Arctic sea ice from global warming.

Interior Secretary Dir Kempthorne cited dramatic declines in sea ice over the last three decades and projections of continued losses. These declines, he told a news conference, mean the polar bear is a species likely to be in danger of extinction in the near future.

Kempthorne also said, though, that it would be "inappropriate" to use the protection of the bear to reduce greenhouse gases, or to broadly address climate change.

He said the decision to list the bear includes administrative actions aimed at limiting the impact of the decision on energy development and other climate related activities.

"This listing will not stop global climate change or prevent any sea ice from melting," said Kempthorne. He said he had consulted with the White House on the decision, but "at no time was there ever a suggestion that this was not my decision."

Kempthorne cited as support for his decision conclusions by the department's scientists that sea ice loss will likely result in two-thirds of the polar bears disappearing by mid-century.

Notwithstanding the secretary's disclaimers, this is the first time the Endangered Species Act has been used to protect a species threatened by the impacts of global warming. There has been concern within the business community that such an action could have far-reaching impact and could be used to regulate carbon dioxide.

Kempthorne proposed 15 months ago to investigate whether the polar bear should be declared threatened under the Endangered Species Act.

"The science is absolutely clear that polar bear needs protection under the Endangered Species Act," said Andrew Wetzler, director of the endangered species program at the Natural Resources Defense Council.

A decision had been expected early this year, but the Interior Department said it needed more time to work out many of the details, prompting criticism from members of Congress and environmentalists.
Environmentalists filed a lawsuit aimed at forcing a decision and a federal court on April 29 set a May 15 deadline for a decision.

Posted by biscotti dana at 11:27 AM No comments: 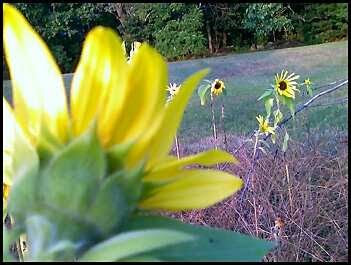 After how many years of home ownership now--14, I believe--I finally bought the kind of lawn mower I've ALWAYS craved: a reel mower.  You know, the kind our immigrant grandparents used on their new American lawns, where people provided the power.
I LOVE it!
I can't even describe the thrill of mowing my 3/4 acre lot with this 16-inch wide thing.  We'll see how I feel by summer's end, but after my son helped me attach the handle, I mowed the entire yard...in about two hours.  The teens laughed as I smiled and cut and re-cut entire patches of the green stuff.  After all, it's early May, so only small patches are actually growing yet, making following my own tracks nearly impossible.
But where it needed mowing, the lawn now looks great!
So what prompted my sudden green turn?  It all began with half a case of organic beer.  Not drunk all at once, mind you.  Inside the Wolaver's Sampler Pack came a $50 coupon good toward a Neuton electric lawn mower.  So, after going round and round with operators at the company who had never heard of mower coupons or organic beer before, I finally found someone who cheerily told me that I might be the first person to take them up on the offer.
Problem was, it would take four to six weeks to receive my new mower.
So, rather than risk the wrath of the neighbors over a possibly overgrown lawn (Heaven forbid!), I picked up the reel mower at the local hardware store.  Naturally, the Neuton arrived the same day that my son and I connected the handle.  But I don't care.  I now have two ways to mow my green stuff...uh, greenly.
We'll soon see how long it takes us to mow our portion of the Village Green, which we share with 21 other homes, of which only about a half dozen neighbors bother to do their share of mowing.  But that's another problem.  And I've recently taken a new vow to try not to complain anymore.
My husband has also gone somewhat green--having just two weeks ago trading in his gas guzzling truck for a Honda Accord Coupe that nearly doubles his gas mileage.  And while we still fill my van with people--we took six teens and adults, plus our adopted greyhound for ice cream tonight--and with stuff--dump runs and I just moved my son out of his dorm yesterday--I am dreaming of a day, soon, I hope, after I land a job (IF I ever land a job) when I will finally buy a Prius.  Or at least an extremely fuel efficient smaller car.
Gas prices?  Well, yeah, of course those bug me.  But I've had an eye on the environment for a while now.  (Haven't we all?)  Especially after speaking with all those scientists when conducting research for my climate change multi media script that I penned for the Christa McAuliffe Planetarium.  And with my recent screenplay that touches on environmental problems in the Arctic regions of Nunavut, Canada.
But I digress.  So rather than bore you with more information than you desire, I shall sign off for the evening.  And daydream of the next time I get to mow my lawn with my new reel mower...where I also benefit from the real workout it provides.
Thanks for dropping by!
Cheers,
Dana
Posted by biscotti dana at 8:41 PM 2 comments: