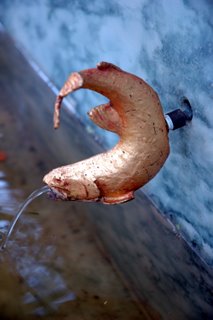 The Fountain of Youth is overrated...at least in so far as it refers to the teen years, especially if you're the mom of those teens. Oy. Now twenty-seven...that was a good year. For those of you not yet there, enjoy it. I'm not the only one who looks back on it fondly.

That reminds me of an incident a few years ago. My husband's grandmother (God rest her) was tired from a day of visiting us and walking about Colonial Williamsburg. "Oh, to be 71 again," sighed the then 79-year-old. Age is all a matter of perspective, I guess.

For those of you keeping track of such things, last week I submitted my "hump" packet to my Goddard College advisor. (We have five packets to submit per semester, last week's was number three.) In this one I managed to squeeze in three annotations, a five-page critical paper, my process letter, and 21 pages of script. Here's the skinny:

Annotations: Somehow I managed to accidentally write three annotations on three films. I prefer to mix up the mediums, but have been ensconced in a novel and a book on craft; the two longer works will show up as annotations in packets number four and five. I actually wrote the annotation on the novel CHOKE by Chuck Palahniuk yesterday and will submit that next packet.

The three films I wrote about are: JAGGED EDGE, NUTS, and THE OTHERS. I viewed two other films, too, but chose not to annotate them, at least not yet. Those films are A MAP OF THE WORLD and REPULSION. The former bored me to tears, the latter was an incredible look at 1965 cinematography as only Roman Polanski could achieve. See it if you can. Especially if you aspire to direct. It'll leave an impression.

My critical paper argued that Beneatha represents the most likely to succeed in the Younger household in the play A RAISIN IN THE SUN by Lorraine Hansberry. If you haven't read many stage plays, and this is one that has so far escaped your list of must reads...grab a copy and read it next. Note the copyright date. You'll be inspired.

I'm still working on my thriller TOPPLE. This time I submitted 21 pages, which takes me to page 47 in my screenplay. I am officially off outline now, so the writing is a bit slower as I work on my next packet submission material. But I'm really enjoying traveling along with my characters and breaking open the mysterious past of my protagonist. (By the way, I am now working on about my seventh or eighth draft. Writing is rewriting, after all.)

I'll be out on the seacoast tomorrow--in Portsmouth, NH for the New Hampshire Film Expo. I'm presenting a Rewriting Workshop from 4 to 6 PM and I'll be attending a Creative Writing workshop in the morning. I'm hoping to squeeze in a few films in between. I also hope to see many of you there!

Thanks for dropping in. Be well.

(Photo above taken by my hubby of one of the sculpted fish in a fountain at Saint-Gaudens National Historic Site located in Cornish, NH. I actually fell asleep on the bench next to it for about a half hour; I never do that sort of thing...well, except perhaps at the beach. I was recuperating after the summer residency at Goddard.)
Posted by biscotti dana at 10:44 AM 1 comment: