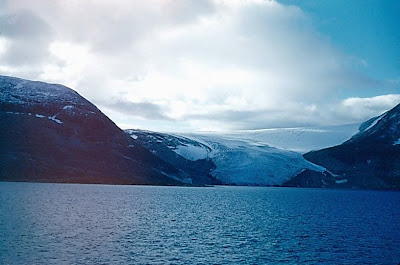 Am flying to Maryland today to finally interview a fascinating cartographer who worked on the DEW Line project up near the Arctic Circle in the 1950s.

I stumbled upon him, or rather his photographs, while researching my graduate thesis project, a spec script set in Nunavut, Canada—in and around Baffin Island. His daughter had posted her father’s photographs from his time there to her flickr account.

Our first correspondence was in February of 2008. And here it is June 2009 and I’m finally listening to the advice of William Zinsser and getting on that plane. “If a subject interests you,” he writes at the end of chapter 23 in his book On Writing Well, “go after it, even if it’s in the next county or the next state or the next country.

“Decide what you what to do. Then decide to do it. Then do it.”

I am so happy to have finally arrived at step three, even if I wonder if I might be subconsciously endorsing Nike.

PHOTO CREDIT: Bill McTigue, as posted to flickr by his daughter Terry (link to entire set of photographs above). 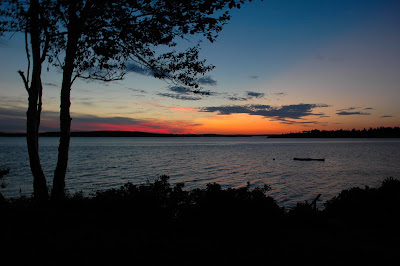 Led my last class today in UNH-M summer school (by attending the matinee at Red River Theatres!) and met with my independent study student for the final time before his next assignment begins this fall. So once my grades are in, I will be kicking back, uh, er, strike that:
I will be writing, redesigning my fall classes, weeding, lawn mowing, reading, visiting colleges with my teens, interviewing a fascinating fellow in southwestern Maryland, helping my son with his new challenges, dramaturging (if you'll allow me to make that a verb) a play for a New Hampshire performance this fall, helping to plan the next New Hampshire Film & Television Office Stage Reading, finishing up my duties as one of three judges for the 48-Hour Film Project of New Hampshire (if you don't like a decision, I was out voted by my two contemporaries...that's my story and I'm sticking to it!), and, of course: island dreaming! 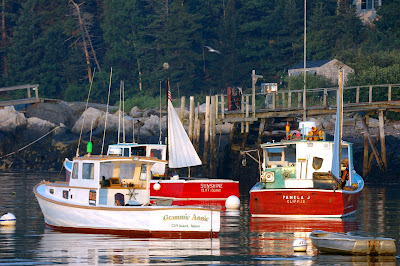 Our last full week of summer we'll once again be visiting the Casco Bay region of Maine. Almost every summer for several years now we have driven up to Portland, unloaded our cargo at the docks, parked our car for a week or two in the Police Garage, and made the pilgrimage to one of the jewels of the Casco Bay region. This summer it's Chebeague Island - our first time there...and our next to last Casco Bay Lines-served island to visit.
To say I love our time away on an island that is so close, yet which feels so far away, is an understatement. I like that we are car free for a week. And we sometimes even go computer free, except two summers ago when I awoke and worked on my graduate thesis every morning, watching the lobstermen and the seagulls cull the bay. And I love the fresh lobsters, sunsets, and family time...even if we hardly see our teens who, along with their cadre of guests, fish, dive off the docks, and suntan every day. 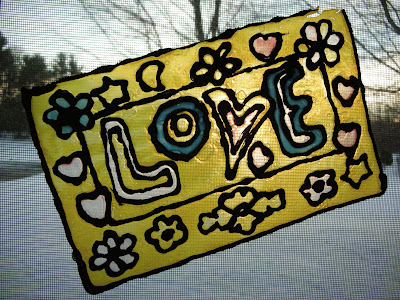 Sweet dreams, everyone. I know mine will be. :)
Posted by biscotti dana at 10:11 AM No comments: 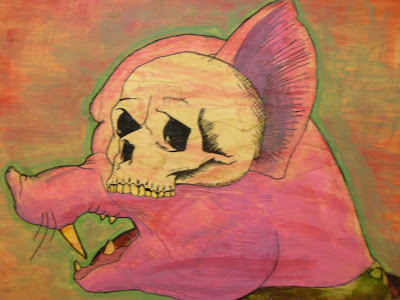 You know when you cry about one thing, but it’s really about another, larger thing going on in your life? That was me today as I pealed out of the tire merchandising lot where originally they were going to replace all four of my bald tires under warranty (which aren’t even a year old yet, doggone it!), but instead decided to point out some ridiculous miniscule text that apparently declared that my tires were TOO WORN OUT to be replaced for free. Say what?!

Okay, so fast forward about three miles. And I do mean fast. Too fast. And I’m sitting at this traffic light crying, feeling completely ridiculous, when it hits me: it’s not the tires that I’m crying over (though I am mad at that snow job and will NEVER buy a Toyota again even if they are the only car company left at the end of all this automotive fiscal mess…).

I’m crying because after weeks of reading and studying this thing called Asperger Syndrome, and trying to figure out how to help my son, I feel like I’m no farther than when I began. Like I’m stuck in my bed sheets trying to outrun the monster in my nightmare. And even though I read the part in the OASIS book last night that said if you feel like you’re stuck after recently having received the diagnosis for your kid: stop, take a breather, you’ll feel better in a few days.

So there I am sobbing and feeling self conscious, like everyone is watching me wondering if the crazy woman is going to be able to see when the light finally turns green. My worries were for nothing though as the ditzy woman next to me chatted on her cell phone and blew her nails dry. (I mean OMG – I thought I was the problem on the road at that moment!)

And so that’s my day in the life of a parent of a kid with AS. And it doesn’t even compare in the tiniest amount to what my son is going through. But if I think too much about it, I may go insane. So instead, I think I’ll heed the lesson in the book and take a few days off. Finally read that Rebecca Rule book that’s been sitting on my nightstand. She’s a New Hampshire humorist (and a great woman); I’m looking forward to letting her entertain me.

(Graphic above by my son Leo; he just had artwork accepted for exhibition at the Annual Asperger's Association of New England Conference in Boston this October! We're awaiting word which of his pieces was selected. Uh, sorry for the bad photo of a great piece of art; that's a mom for ya....)

Posted by biscotti dana at 7:09 PM No comments: