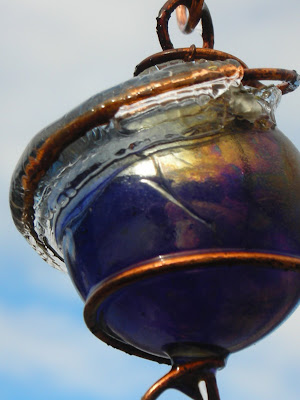 I just submitted my final student's grade for the semester, and only have about a half day's paperwork left to go before I'm officially done with this fall's university chores.
Then onto a grant application that's due January first for an organization I'm volunteering with, and writing press releases for the New Hampshire Film & Television Office's Script Competition for the Stage Reading Series.
Plus, of course, plenty of my own writing to do, and reading and editing to accomplish (yes, Kyle, your latest novel revision is on my to do list; actually, it's on my "can't wait to get to it" list!). 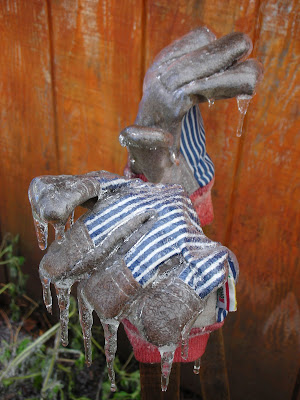 But the presents are wrapped and beneath the tree, as I sit in my newly created living room* listening to Frank Sinatra's holiday album and watching the birds eat the seed I just scattered for them on the stairs outside the sliding glass doors. (*I love shifting furniture around; the latest change has turned my dining room into my living room and vice versa.)
Okay, back to work.  For me.  You too, if it applies.  Happy holidays!
(Photos above taken after last week's ice storm: a marble in a hanging sculpture thingy I once bought, and the gloves are my own garden sculpture design.  Yes, I am that odd.  Thank you for noticing.)
Posted by biscotti dana at 12:21 PM 2 comments: 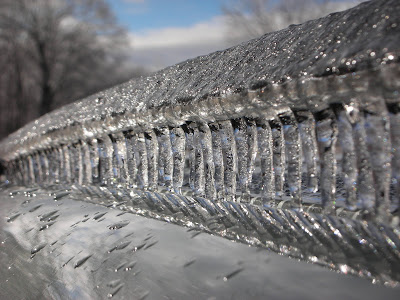 Can you guess where these icicles once hung? 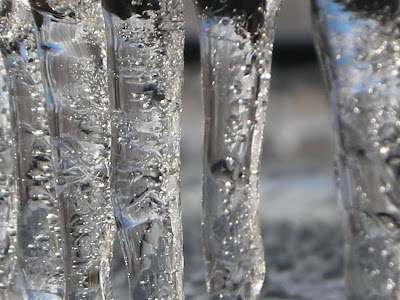 I know: I should simply post these to my Flickr account since this is no more than a post of photos, but I'm in a hurry.  On my way to a Town Water Resources Subcommittee Meeting.  Seems ironic, eh? 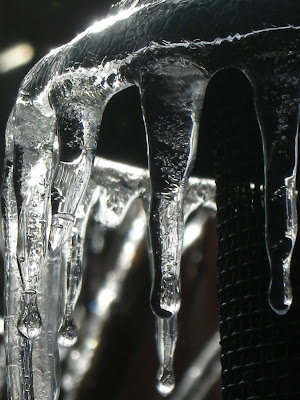 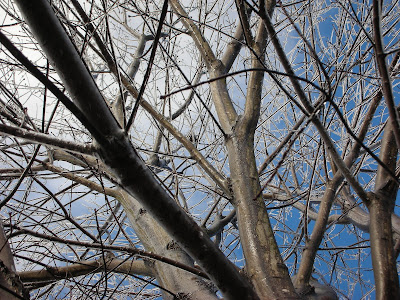 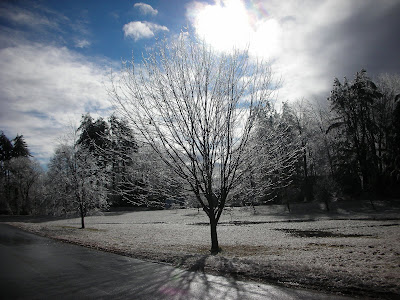 A winter wonderland. Of course that's easy for me to say...now that we have power again.  Spent the first 36+ hours of the storm cooking on the wood stove and helping ourselves to plenty of gravity-fed water.  While we played Scattergories by candlelight and via built-in lights on the bills of our LL Bean baseball caps.  Made some fun memories this storm.
Cheers!
Posted by biscotti dana at 6:40 PM No comments:

How do I procrastinate? 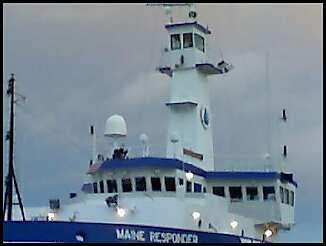 Let me count the ways.
Ever notice that when you have ONE thing you must accomplish, EVERYTHING else on your to-do list suddenly gets done?  And then you blog about it....
And while I have not one revision to show for PLOWING UP A SNAKE today, I did read all my students' essays, grade them and the late papers and quizzes that came in this week, posted the grades, even submitted a final grade for one of my Independent studies, and answered all my e-mail that's been backlogged for a couple weeks today.  I even answered today's mail.  Oh, and I did the laundry.
And now as I place the final touches on my latest essay and on a short story I've been working on, I am peeking at the clock and worrying over the fact that I probably will not get to my screenplay.  At least not today.
It's not so much the curse of the blank screen or writer's block.  It's just been so long since the reading that I have to pull out all my notes, digest them again, and then plan my attack.  Let's face it: writing's hard work.  Anyone who says otherwise is either lying or one lucky you-know-what.
And yet occasionally writing flows easily for me.  I have a couple new short plays that I'm partial to.  Actually three new ones since the PLOWING reading.  And the short story simply streamed from my consciousness, too.  So why am I whining?
Okay. I feel better now.  Hope I've helped you too.
Happy weekend!
Posted by biscotti dana at 8:00 PM 12 comments: 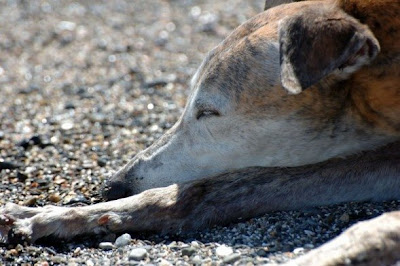 Part drug dealer, part counselor, all drifter, the forty-something character John LeTour of Paul Schrader’s LIGHT SLEEPER is both charming and captivating.  We might despise what he does for a living, but because he genuinely cares about the people that surround him, other readers may find themselves as I did: rooting for this unlikely hero.

The script is a quick and delightful read because Schrader writes for his audience.  Sure, ideally the screenplay will eventually serve as a blueprint for a film as this one did.  But before it can make its way to the can it must first capture the attention, admiration, and accolades of the film financiers, actors, agents, cinematographer, studio execs, and more.

One of the difficulties in reading most screenplays is the inclusion of industry formatting.  Instead of using standard slug lines, Schrader begins one sequence with the title “CONFESSOR LETOUR.”  In the next line we learn when and where we are, but from the onset we understand the thrust of the story.  Hence we read on anxious to learn about this remarkable character who is more than just a drug dealer to his clients, but a confidant, a counselor, an in-person hotline operator, and even—occasionally—a friend.

The dialogue is equally enthralling.  Call me picky, but I enjoy hearing characters actually speaking to each other—listening or deliberately not listening—rather than diving into tangents as the writer suddenly realizes he needs to develop a plot thread.

Schrader also writes as people speak.  In short sentences. Using nouns and verbs.  One word, when necessary.  Really.  And an occasional simple expression, foul or not.  It makes for a quick and enjoyable read, one that can easily fit into the hectic routine of just about any reader.

Grab LIGHT SLEEPER* and slip it into your beach bag, carry on, or glove box to read the next time you need to fill a few minutes.  You’ll be glad you did, even if the subject matter falls a bit outside your ordinary world…or triangularly within it.

* Now you'll have to settle for the trilogy collection of Schrader works that includes the mesmerizing TAXI DRIVER, LIGHT SLEEPER and AMERICAN GIGOLO, also published by Faber & Faber. (Apparently they've discontinued the single issue screenplays of LIGHT SLEEPER and TAXI DRIVER, though you can score a used copy.)